Spring showers can only mean one thing for our floors inside our homes…PUDDLES! First class put their thinking caps on today and came up with an experiment that would test which material would clean up puddles best. They made a prediction and then carried out the experiment to establish a result. Each of the children made sure to measure the water and the size of the materials carefully. It is so important that each test is fair so that the result is accurate.

Not only did first class discover whichmaterial absorbed best, they also discovered that playing with water is lots of fun!

We completed two light experiments last week to show the splitting and mixing of light/colour.

Experiment 1: We made rainbow spinners to show that when the rainbow colours are spun quickly, your eyes can’t keep up and the spinner appears white.

Experiment 2: We explored white light and colour by placing skittles and the outer circle of a plate. We added water and observed what happened. The colours moved towards the middle and created a whirl of colour.

We started working with IZAK9 maths blocks on Friday. Matilda and Luke from 5th class gave us two tasks to complete. We had great fun working in our teams to solve the maths problems. 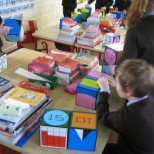 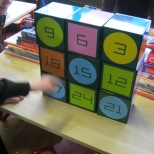 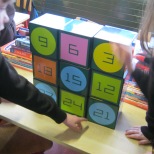 As a part of Maths Week, 5th class, Room 7 have come up with a number of word problems for all of the students in first class to solve. This morning, the two classes met and first class proved their worth as they solved over 20 word problems together.

On Friday, 5th class plan to come back with problems that are even more challenging. We can’t wait! 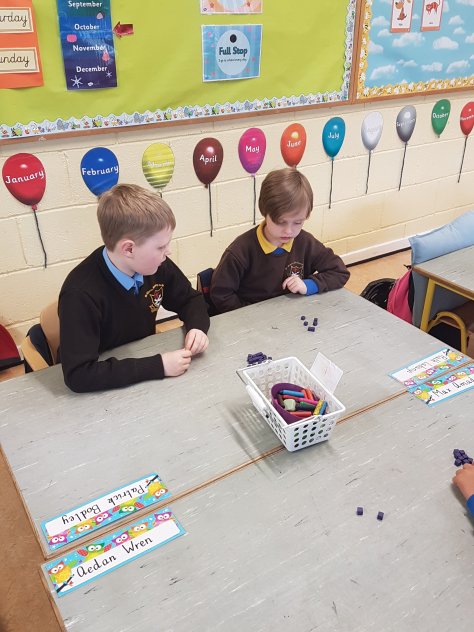 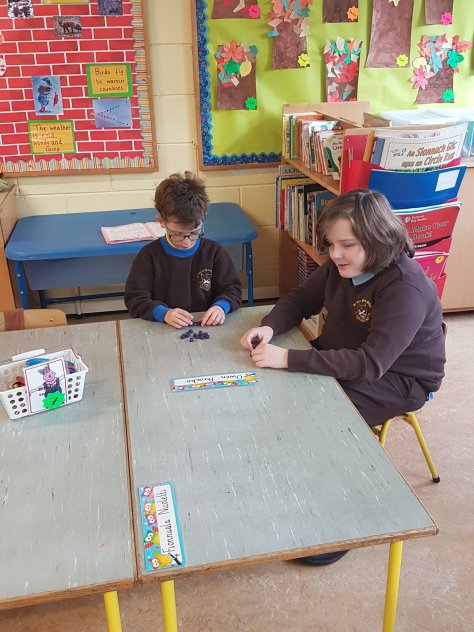 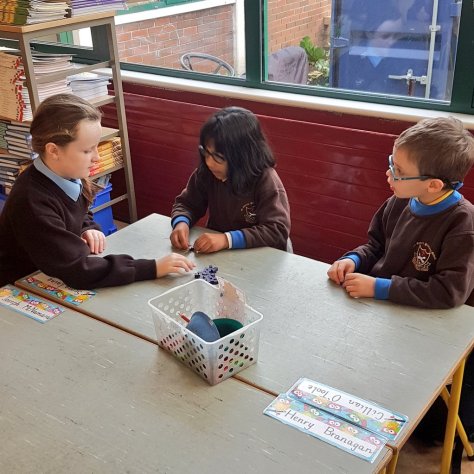 This is a cartoon about me waking up late for school. I created this with a programme called Scratch. Scratch is a website that you can use to make games and cartoons and more. You programme a character to do whatever you want and you can add sounds and speech. Click the link below to watch it.

We sorted objects according to colour!

In Ms.Nic Gearailt’s class we often play the card game 21.We like playing this game because it is short. You never know, it’s a 50-50 chance that you will get the highest score. When we were playing 21,we sometimes got the same numbers or the answers went up in patterns of twos or threes. Sometimes the cards went up in order. We are fascinated by these answers. 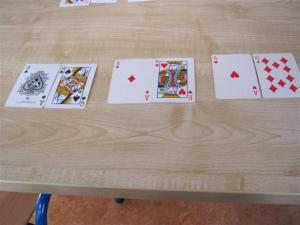 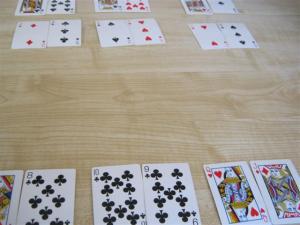 Junior Infants from room 1 and 2 had great fun building houses today. Here are some pictures of us working together.

Today, Wednesday 15th May, a lady called Natasha came into 1st Class and talked to us all about reducing our waste, reusing different things and recycling as much as we can.

She told us lots of interesting facts about where paper and plastic come from and how they are made. We were amazed to see all of the different bags, clothes and jewellery that had been made out of recycled materials like tents, tyres and sweet wrappers!

We talked a lot about reducing the amount of electricity that we use at home.

Over the next few days we will update you and tell you all about the project we presented at the Science Fair. We were very lucky to be picked to take part and we worked very hard.

Last week in 4th class we went to the Young Scientist Fair in the RDS to present our project on pulley systems. We left school at 7:45am on Friday 11th January and returned at 5:30pm. We had a fantastic day and learned so much.

We will tell you a little bit about our project now.

Firstly Miss O’Donnell gave us a set of questions. We were split up into groups and had to discuss answers to the questions. You can see the questions and answers on our display.

After that we discussed it as a class, we watched a video about single fixed pulleys and single movable pulleys.

Then each group were given six blocks. We had to try to move the big red block that we were given. After that we had to stack two blocks on top of the red block and try to move it without them falling. We couldn’t do it but then a boy in our class called Trofim came up with the idea of the pulley.

Some people made homemade pulleys and then we found out if you use a thick rope on the pulley it would fall off the spool .Then there were five people that went out with a teacher and tried to find everyday objects that used pulley systems.

We watched this video about NASA. We saw that even NASA uses pulleys that can hold up to 300,000 kg and they have 3 of them .They use the pulleys for pulling the rocket up and down .The rocket weighs 200,000 kg

We hope you enjoy our project as much as we did! 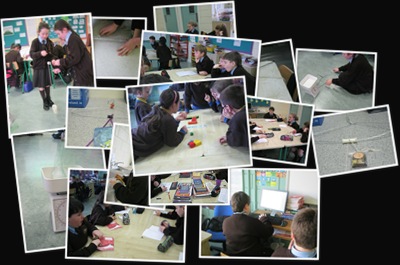