Fourth Class visited the Water Ways Ireland visitor centre in the Grand Canal Dock during Engineers week. They learned all about how the canals were engineered and the history of them. Visit the education page for Waterways Ireland here.

They then went on a guided walk around the Grand Canal dock area and visited the different locks in the area. They learned all about the engineering required to create the basin. 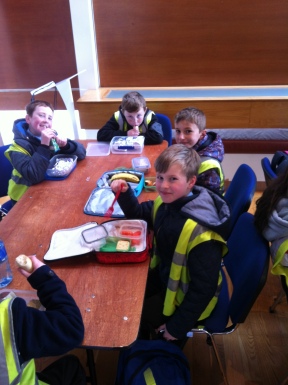 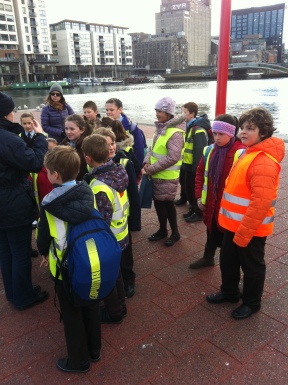 Ireland has a wealth of waterways – rivers, lakes and canals – which offer unrivalled opportunities to see the island from different perspectives. The history and background to the natural and man-made assets that are Ireland’s waterways is colourful and chequered. While the rivers and lakes of Ireland were formed during the last ice age, work on the first canal, the Newry Canal, commenced in 1731. New networks of canals, lakes and rivers were established in the following 130 years linking the country from east to west and north to south. The networks were developed principally for commercial reasons, but with the advent of the rail networks and later large road transport vehicles and improved road infrastructure, the waterways went into steady decline as commercial enterprises. By the 1950s, commercial traffic on the waterways was all but finished. In 1954 the Inland Waterways Association of Ireland (IWAI) was formed. Since then various campaigns have been fought successfully by them to retain the waterways. In 1974 the Royal Canal Amenity Group (RCAG) was founded to promote and participate in the development of the full amenity potential of the Royal Canal in County Dublin. The group subsequently expanded, and branches were set up all along the line of the Royal Canal.  In the mid 1980s, with the passing of the Canals Act in the South, responsibility for the canals passed from Córas Iompair Éireann (CIE) to the Office of Public Works (OPW). Steps were taken immediately to administer the waterways not just as navigations but as recreational facilities. The OPW adopted the same policy with regard to the other waterways under its remit, i.e. the Shannon and Barrow Navigations. In Northern Ireland the Department of Agriculture
had responsibility for the waterways.